I have recently edited and somewhat expanded the macros page on the Common Lisp Cookbook. I find it may more legible and reader friendly, so I reproduce it below (however, I cut two parts so than you get the essential).

You’d better read it on the Cookbook: https://lispcookbook.github.io/cl-cookbook/macros.html

The word macro is used generally in computer science to mean a syntactic extension to a programming language. (Note: The name comes from the word “macro-instruction,” which was a useful feature of many second-generation assembly languages. A macro-instruction looked like a single instruction, but expanded into a sequence of actual instructions. The basic idea has since been used many times, notably in the C preprocessor. The name “macro” is perhaps not ideal, since it connotes nothing relevant to what it names, but we’re stuck with it.) Although many languages have a macro facility, none of them are as powerful as Lisp’s. The basic mechanism of Lisp macros is simple, but has subtle complexities, so learning your way around it takes a bit of practice.

A macro is an ordinary piece of Lisp code that operates on another piece of putative Lisp code, translating it into (a version closer to) executable Lisp. That may sound a bit complicated, so let’s give a simple example. Suppose you want a version of setq that sets two variables to the same value. So if you write

It should be obvious that we can’t define setq2 as a function. If x=50 and y=-5, this function would receive the values 50, -5, and 11; it would have no knowledge of what variables were supposed to be set. What we really want to say is, When you (the Lisp system) see:

then treat it as equivalent to:

Actually, this isn’t quite right, but it will do for now. A macro allows us to do precisely this, by specifying a program for transforming the input pattern (setq2 v1 v2 e) into the output pattern (progn ...).

Here’s how we could define the setq2 macro:

It takes as parameters two variables and one expression.

Then it returns a piece of code. In Lisp, because code is represented as lists, we can simply return a list that represents code.

We also use the quote: each quoted symbol evaluates to itself, aka it is returned as is:

So, our macro retourns the following bits:

We must start writing a macro when we know what code we want to generate. Once we’ve begun writing one, it becomes very useful to check effectively what code does the macro generate. The function for that is macroexpand. It is a function, and we give it some code, as a list (so, we quote the code snippet we give it):

Yay, our macro expands to the code we wanted!

We can confirm that our expression e, here (+ z 3), was not evaluated. We will see how to control the evaluation of arguments with the comma: ,.

Note: with Slime, you can call macroexpand by putting the cursor at the left of the parenthesis of the s-expr to expand and call the functionM-x slime-macroexpand-[1,all], or C-c M-m:

Our macro is very close to the following function definition:

If we evaluated (setq2-function 'x 'y '(+ z 3)) (note that each argument is quoted, so it isn’t evaluated when we call the function), we would get

This is a perfectly ordinary Lisp computation, whose sole point of interest is that its output is a piece of executable Lisp code. What defmacro does is create this function implicitly and make sure that whenever an expression of the form (setq2 x y (+ z 3)) is seen, setq2-function is called with the pieces of the form as arguments, namely x, y, and (+ z 3). The resulting piece of code then replaces the call to setq2, and execution resumes as if the new piece of code had occurred in the first place. The macro form is said to expand into the new piece of code.

This is all there is to it, except, of course, for the myriad subtle consequences. The main consequence is that run time for the setq2 macro is compile time for its context. That is, suppose the Lisp system is compiling a function, and midway through it finds the expression (setq2 x y (+ z 3)). The job of the compiler is, of course, to translate source code into something executable, such as machine language or perhaps byte code. Hence it doesn’t execute the source code, but operates on it in various mysterious ways. However, once the compiler sees the setq2 expression, it must suddenly switch to executing the body of the setq2 macro. As I said, this is an ordinary piece of Lisp code, which can in principle do anything any other piece of Lisp code can do. That means that when the compiler is running, the entire Lisp (run-time) system must be present.

We’ll stress this once more: at compile-time, you have the full language at your disposal.

Novices often make the following sort of mistake. Suppose that the setq2 macro needs to do some complex transformation on its e argument before plugging it into the result. Suppose this transformation can be written as a Lisp procedure some-computation. The novice will often write:

The mistake is to suppose that once a macro is called, the Lisp system enters a “macro world,” so naturally everything in that world must be defined using defmacro. This is the wrong picture. The right picture is that defmacro enables a step into the ordinary Lisp world, but in which the principal object of manipulation is Lisp code. Once that step is taken, one uses ordinary Lisp function definitions:

One possible explanation for this mistake may be that in other languages, such as C, invoking a preprocessor macro does get you into a different world; you can’t run an arbitrary C program. It might be worth pausing to think about what it might mean to be able to.

Another subtle consequence is that we must spell out how the arguments to the macro get distributed to the hypothetical behind-the-scenes function (called setq2-function in my example). In most cases, it is easy to do so: In defining a macro, we use all the usual lambda-list syntax, such as &optional, &rest, &key, but what gets bound to the formal parameters are pieces of the macro form, not their values (which are mostly unknown, this being compile time for the macro form). So if we defined a macro thus:

Note that the values of the variables are the actual expressions (+ a 1) and (zap zip). There is no requirement that these expressions’ values be known, or even that they have values. The macro can do anything it likes with them. For instance, here’s an even more useless variant of setq: (setq-reversible e1 e2 d) behaves like (setq e1 e2) if d=:normal, and behaves like (setq e2 e1) if d=:backward. It could be defined thus:

Here’s how it expands:

And with a wrong direction:

We get an error and are prompted into the debugger!

We’ll see the backquote and comma mechanism in the next section, but here’s a fix:

Now when we call (setq-reversible v1 v2 :other-way-around) we still get the error and the debugger, but at least not when using macroexpand.

Before taking another step, we need to introduce a piece of Lisp notation that is indispensable to defining macros, even though technically it is quite independent of macros. This is the backquote facility. As we saw above, the main job of a macro, when all is said and done, is to define a piece of Lisp code, and that means evaluating expressions such as (list 'prog (list 'setq ...) ...). As these expressions grow in complexity, it becomes hard to read them and write them. What we find ourselves wanting is a notation that provides the skeleton of an expression, with some of the pieces filled in with new expressions. That’s what backquote provides. Instead of the the list expression given above, one writes

You can think of it, and use it, as data interpolation:

That’s mostly all there is to backquote. There are just two extra items to point out.

When we are inside a backquote context and we want to print an expression literally, we have no choice but to use the combination of quote and comma:

Second, one might wonder what happens if a backquote expression occurs inside another backquote. The answer is that the backquote becomes essentially unreadable and unwriteable; using nested backquote is usually a tedious debugging exercise. The reason, in my not-so-humble opinion, is that backquote is defined wrong. A comma pairs up with the innermost backquote when the default should be that it pairs up with the outermost. But this is not the place for a rant; consult your favorite Lisp reference for the exact behavior of nested backquote plus some examples.

I said in the first section that my definition of setq2 wasn’t quite right, and now it’s time to fix it.

Suppose we write (setq2 x y (+ x 2)), when x=8. Then according to the definition given above, this form will expand into

Chances are that isn’t what the macro is expected to do (although you never know). Another problematic case is (setq2 x y (pop l)), which causes l to be popped twice; again, probably not right.

The solution is to evaluate the expression e just once, save it in a temporary variable, and then set v1 and v2 to it.

To make temporary variables, we use the gensym function, which returns a fresh variable guaranteed to appear nowhere else. Here is what the macro should look like:

Here gensym has returned the symbol #:g2003, which prints in this funny way because it won’t be recognized by the reader. (Nor is there any need for the reader to recognize it, since it exists only long enough for the code that contains it to be compiled.)

Exercise: Try writing the new version of the macro without using backquote. If you can’t do it, you have done the exercise correctly, and learned what backquote is for!

The moral of this section is to think carefully about which expressions in a macro get evaluated and when. Be on the lookout for situations where the same expression gets plugged into the output twice (as e was in my original macro design). For complex macros, watch out for cases where the order that expressions are evaluated differs from the order in which they are written. This is sure to trip up some user of the macro - even if you are the only user.

What Macros are For

The following video, from the series “Little bits of Lisp” by cbaggers, is a two hours long talk on macros, showing simple to advanced concepts such as compiler macros: https://www.youtube.com/watch?v=ygKXeLKhiTI It also shows how to manipulate macros (and their expansion) in Emacs. 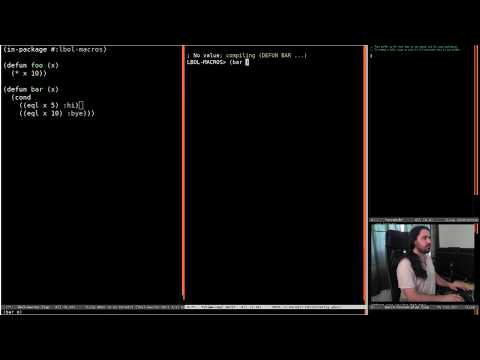